Yes! Catherine came over to help me take the quadricycle (link is to yesterday's rant) on its maiden voyage. A qualified success. We pedaled to San Anselmo and back (probably 5 miles total). None of the jitters and feedback loops in the steering mechanism that I expected came about, so that's good news.

The problems: I need to put in an idler pulley in a place where I'd hoped that a friction bearing would work (it didn't, ate a good way through a piece of mild steel which I might have to re-braze), and I've got a sticking segment of chain on one of the drive trains that I need to replace, but it's a really cool way to tour.

The right seat was originally designed for her (seat back to pedal assembly distance), and the stearing tiller ended up on that side, so she ended up driving. She adjusted quickly to the touchy aspects of having a short wheelbase and the steering wheels almost underneath us very quickly, which was good.

The center of gravity with two of us on it was just about perfect.

Need to tweak on the seats a bit. If I had a real torch I'd braze something together that would be more stable than the pipe-clamped plywood assemblies I've got now which feel a little unstable, but are plenty strong. I need to go buy some big-ass cushions and some BMX pads for the angle bracket I used for the steering mechanisms.

Got lots of stares, a few "that's a really cool idea" comments. With the clickety-clack of that friction bearing and the slow laid-back (literally, it's a recumbent!) pace it felt like touring around in a Model T. I'm hooked.

All the brazes seem to be holding despite a few jolts where we couldn't avoid pot-holes.

Need to get by the bike store and buy some spare BMX chain segments (the front sprockets are BMX pedal assemblies so I need the extra width), spare tubes and tires (you wouldn't believe how old some of these parts are!), and remember to take a small toolset to the playa, but this is gonna work! (can you tell I'm psyched?)

Now I may have to buy a torch and learn to weld or go whole hog and borrow time on a TIG setup and build a serious vehicle. This whole recumbent thing is just neat.

Update many months later: Pictures of me tweaking the brakes taken by Ian Barberi who welded some of my brazes which failed just before Burning Man and turned the quadricycle from a hack into a usable vehicle. Ian rocks! 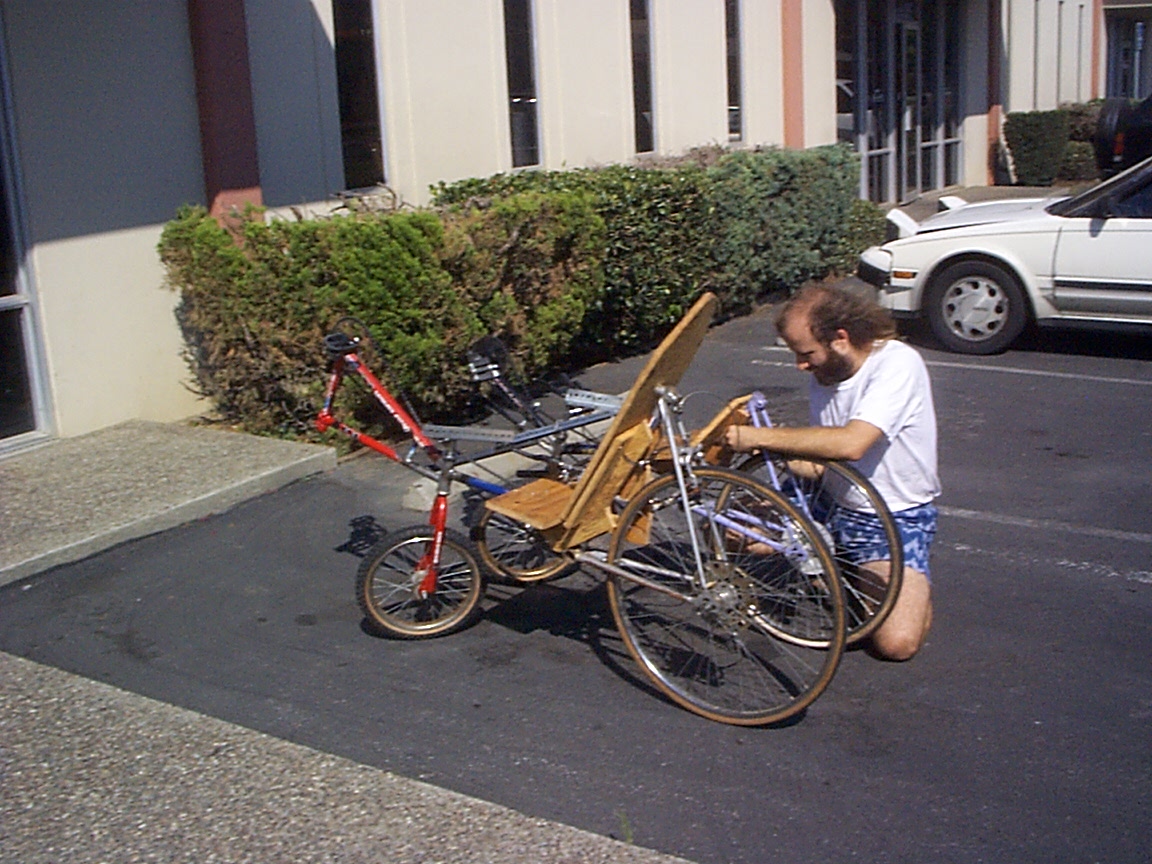